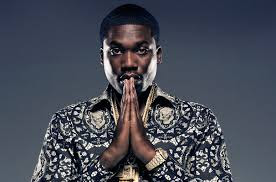 Rapper Meek Mill has expressed his gratitude to his supporters after he was handed another two to four years behind bars for violating his probation.

The Ima Boss star, real name Robert Rihmeek Williams, was convicted of drug dealing and gun possession in 2008, and received a prison sentence of 11 to 23 months. Upon his release in 2009, he was placed on probation, but struggled to stick to the terms of the arrangement and was arrested for fighting at St. Louis International Airport in Missouri in March (17) and again in August (17) for recklessly driving his motorcycle in New York City.
He agreed to plea deals in both cases, but on Monday (06Nov17), Pennsylvania judge Genece Brinkley cited a failed drug test and a failure to comply with a court order restricting his travel for her decision to lock him up again.
Meek’s fans and celebrity friends, including JAY-Z, T.I., and Kevin Hart, hit out at the harsh sentence, which came as a surprise since prosecutors had recommended he be spared jail, and on Tuesday (07Nov17), the embattled rapper reached out to his supporters via his lawyer, Brian McMonagle.
“I met with Meek this morning and he asked me to thank his family, friends and fans for their love and support,” he told People.com.
McMonagle also vowed to appeal the punishment, adding, “We fully intend to right this terrible wrong and bring him home.”
After the shock sentencing, another attorney for Nicki Minaj’s ex-boyfriend, Joe Tacopina, told TMZ.com the judge had had a “long-standing vendetta” against his client, suggesting the ruling was payback for Meek allegedly snubbing her idea to record a cover of Boyz II Men’s On Bended Knee and give her a shout out – a suggestion the rapper laughed at and refused.
Post Views: 115

Fergie’s new album Double Dutchess will be out in 10 days on September 22nd and it’s available for pre-order here. If you decide to pre-order, you’ll instantly receive ‘Hungry‘ with Rick Ross, ‘Life Goes On‘, ‘M.I.L.F.$‘, ‘L.A.Love‘ with YG and ‘You Already Know’ with Nicki Minaj. This afternoon Fergie teams up with Nicki for the […]

Kukere crooner, Iyanya, had a recent interview with Bolanle Olukanni, host of the Juice on Ndani TV, where he spoke on his fallout with his former friend and boss, Ubi Franklin, his move to Don Jazzy’s Mavin records and his relationship with top beautician, Freda Francis. When asked what led to his departure from Made […]

I will only sleep well if PDP returns to power – Jonathan